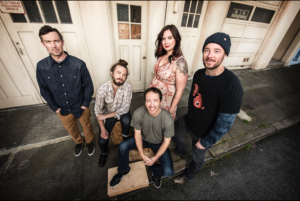 based progressive bluegrass outfit’s most surprising, creative, and yes, energetic studio excursion to date. Songs like “Chasing My Tail” and “Alison” are rooted in tradition but as current as tomorrow, animated by electrifying performance, vivid production, and the modernist power that has made Yonder one of the most popular live bands of their generation. Melding sophisticated songcraft, irrepressible spirit, and remarkable instrumental ability, LOVE. AIN’T LOVE is a testament to Yonder Mountain String Band’s organic, dynamic, and intensely personal brand of contemporary bluegrass-fueled Americana.

“Love. Ain’t Love, an album rooted in modern bluegrass and punctuated by genre-jumping excursions into world music, reggae and all points in between” – Rolling Stone Country

LOVE. AIN’T LOVE is produced by Yonder Mountain String Band and longtime collaborator John McVey, with the majority of the album recorded at Coupe Studios in Yonder’s home base of Boulder, CO.  Situational dialogue, sound effects, and other overlapping ephemera, are interlaced with the modernist musical power that has made Yonder one of the most popular live bands of their generation.

“There are no limits to what we do” says Aijala. “We’ll try anything, if it feels good, we’ll try it again.”

2017 will see Yonder continue its seemingly endless touring, leading towards next year’s 20th anniversary of their initial coming together, an irrefutably momentous occasion.

“At 20 years deep into their career, Yonder is as youthful, tuneful, and energetic as ever. They’ve survived lineup changes and the rigors of the road to come out the other side as one of the top newgrass ensembles around.” – Premier Guitar

“When we were first starting, our creativity was rooted in rebelliousness. Now, there’s a greater conscious awareness and attention to detail that we’re bringing to our writing and recording. Our nature and instincts remain progressive. We’re just doing it in a way that’s sharper, more musical, and way more satisfying,” says Ben Kaufmann.

With its melodic flair, expert technique, and forward-thinking fervor, LOVE. AIN’T LOVE is a strikingly assured and well-crafted manifestation of Yonder’s matchless musical vision. Nearly two decades in, Yonder Mountain String Band is still utterly unto themselves, a one-of-a-kind, once-in-a-lifetime combo whose inventiveness, versatility, and sheer imagination shows no sign of winding down.

On Friday, July 1st, 2016 we attended the Grand Opening of the Toys "R" Us at the Crossings Premium Outlets in Tannersville, PA.   If you're a local … END_OF_DOCUMENT_TOKEN_TO_BE_REPLACED

I recently had the opportunity to sit down with Jill Carletti, the Managing Director of Harmony Presents, for a candid interview.  When Eric and I … END_OF_DOCUMENT_TOKEN_TO_BE_REPLACED